GAAP AND STATE AND LOCAL GOVERNMENTS 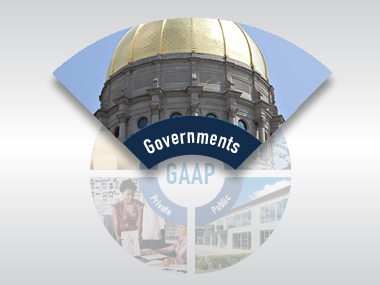 Preparing a financial report in compliance with Generally Accepted Accounting Principles (GAAP) establishes greater accountability and transparency between a government and its citizens, legislative and oversight bodies, investors, and creditors.

Preparing a financial report in compliance with GAAP can make it less expensive for a government to borrow money and control its expenses.

Preparing a financial report in compliance with GAAP also can make it less expensive for a government to borrow money and control its expenses. For example:

Every state in the U.S. follows GAAP.

Some states also require governments within their borders to follow GAAP. For example:

DO SOME GOVERNMENTS CHOOSE NOT TO COMPLY WITH GAAP?

Some governments, particularly small localities, choose to prepare their financial reports using an Other Comprehensive Basis of Accounting (OCBOA) or regulatory basis in lieu of GAAP.


However, preparing financial reports in compliance with GAAP, specifically the reporting of accrual information, provides users with the most comprehensive measures of financial health available by reporting the full cost of providing government services, the resources that a government can call upon to meet citizen needs (such as investments and capital assets), and the debts that a government has incurred and must repay with its resources.

The “pay-as-you go” cash basis and modified cash basis do not measure the full cost of providing services, only what was paid for in cash. As a result, financial information reported in compliance with GAAP meets the needs of users in ways OCBOA or a regulatory basis cannot.

Additionally, taxpayer associations, unions, and other stakeholder groups are provided with access to much of the information they need, and elected officials have a more accurate picture of their government’s financial position.

The Importance of GAAP Video