Shundrawn A. Thomas
Board of Trustees 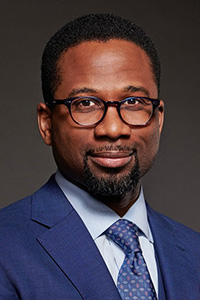 Shundrawn A. Thomas joined the Financial Accounting Foundation (FAF) Board of Trustees on January 1, 2020.  His term concludes on December 31, 2024.

Shundrawn A. Thomas the Founder and Managing Partner of The Copia Group (TCG), a private investment firm which provides capital solutions for lower middle market companies and drives social impact through the power of scalable businesses. Shundrawn has earned an industrywide reputation as an innovator in investment management and a champion of socially responsible investing. As an executive, he is a pacesetter in diversity-filed organizational transformation, and he serves as a trusted strategic advisor to the C-suite and boards of directors.

Shundrawn most recently served as President and Chief Executive of Northern Trust Asset Management and a member of the Management Group of Northern Trust Corporation. His previous executive roles include Head of Funds and Managed Accounts, Managing Director of Exchange Traded Funds, President of Northern Trust Securities, and Head of Corporate Strategy. Prior to joining Northern Trust, he served as a vice president in the equities division of Goldman Sachs and was previously employed with Morgan Stanley, holding positions in fixed income sales, trading, and research.

Highly respected for his authentic leadership style, Shundrawn has earned numerous industry accolades over the years. Black Enterprise Magazine identified him as one of 2011’s “75 Most Powerful Blacks on Wall Street” and again in 2017 as among the Most Powerful Executives in Corporate America.” In 2020, he was identified by Savoy Magazine as one of the “Most Influential Black Executives in Corporate America. In 2021, ThinkAdvisor selected Shundrawn as a member of the 2021 class of industry luminaries and InvestmentNews honored him with a lifetime achievement award for leadership in diversity, equity, and inclusion.