Manju Ganeriwala
Board of Trustees 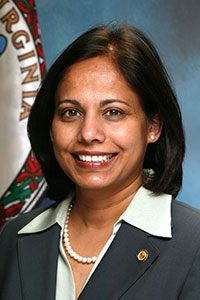 Manju Ganeriwala joined the Financial Accounting Foundation (FAF) Board of Trustees on January 1, 2022. Her term concludes on December 31, 2026.

Ms. Ganeriwala is the treasurer of the Commonwealth of Virginia. She was first appointed treasurer in 2009 and was subsequently reappointed by governors from both major political parties. In her role, she oversees the investment of public funds, issuance of bonds to finance infrastructure needs, management of state debt, provision of banking services to state agencies, and administration of the state’s insurance and unclaimed property programs. Additionally, she serves as chair of the Virginia Treasury Board and is a member of several other state boards including Housing, Port Authority, Resources Authority, and College Savings Plans. Prior to her appointment as treasurer, she served as deputy secretary of finance for Virginia and held roles in the private sector for the East Ohio Gas Company.

Ms. Ganeriwala holds a Bachelor of Commerce degree from the University of Bombay and a Master of Business Administration from the University of Texas at Austin. She has received numerous professional awards including, the 2009 YWCA’s Outstanding Woman Award in Government and was a 2013 Toll Fellow. She formally served on the Municipal Securities Rulemaking Board and held the vice chair position in fiscal year 2020.